Tips for Building Rapport in Sales by Using Video

on
Posted by Tyler Samani-Sprunk on January 4, 2018

Building rapport is all about being authentic and human.

By definition, rapport is “a relationship marked by mutual understanding and trust.” Establishing those kinds of relationships is what sales people have been trying to do for years, with varying degrees of success. But in this digital, global world, we can’t rely on the same rapport-building tactics that worked for them just a couple decades ago.

So what does work today? Well, when you can’t meet in person, what better way is there to establishing understanding and trust than through video?

Why Video Works for Building Rapport in Sales

Put simply, video helps to create rapport better than most other forms of communication because it's the closest thing to meeting with someone face to face.

As humans, we're designed to be able to read body language and facial expressions and to interpret meaning from things like voice tone and inflection. This is especially true when we're trying to figure out if someone is being honest - and a whopping 97% of people already don't find salespeople trustworthy. 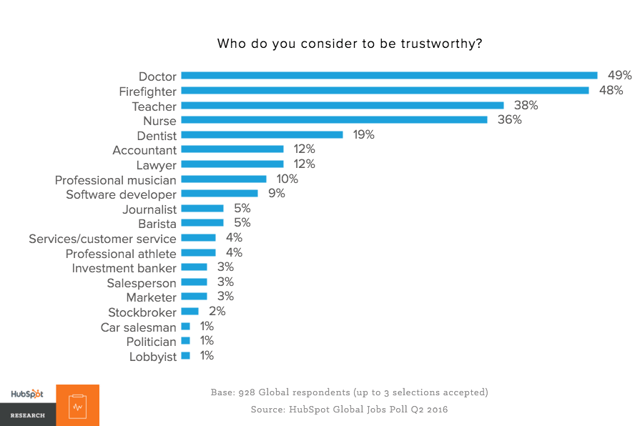 Video allows you to convey those non-verbal cues in a way that email and phone calls can't. When you're being authentic in an email, nobody can tell - but it's hard to hide authenticity on camera.

And that's not the only reason video works. If you asked all of your prospects to create a short video and send it back to you, how many of them would do it? Probably none, right? That's because they don't see creating video as a simple task, they see it as something that's time consuming, difficult, and possibly expensive.

So when you send a video to them, they're surprised. It shows them that you cared enough to go through the trouble of creating that video, and that in itself will help you create a stronger relationship.

Building Rapport with the Masses

Regardless of your company size, sales are easier to make when people feel like they have some sort of positive relationship with the leadership of the company. This is especially true when the sale itself doesn't involve a one-to-one sales process, like with e-commerce and many SaaS companies.

This is also where video marketing becomes extremely powerful. After all, it's not like your CEO can sit in on all your sales calls. But they can get on camera to show people who they are and why they're passionate about what your company does for them.

Here's how it's done:

1) Get your leadership on camera. The higher up in the company, the better.

2) Have them talk about subjects they're passionate about. This should be easy, but it's important - that passion will come through.

3) Don't let them read from a script. Have them organize their thoughts beforehand and use as many takes as you need to, but it's important that they sound authentic.

4) Don't kill their personality. Let some of those quirks shine, nobody trusts a corporate robot.

5) Don't over-produce the video. The video needs to be well-done, but it shouldn't look like a Hollywood movie. People tend to equate lower production value with higher authenticity. Noticing a theme? Authenticity is EVERYTHING.

6) Have them make videos that offer value to the person watching. Your leadership is probably thought of as inaccessible experts. Have them offer some insight into the industry, your customers problems, etc. Offering value will go a lot further in building a relationship than talking about your company or, even worse, recording a sales pitch.

Want to see how this works when it's done well? Below is a link to a video from Rand Fishkin, founder of Moz, a huge SEO software company. He produces videos like this one each week in his Whiteboard Friday series. And, although I've never met him, I can't help but feel that I know him after watching and learning so much from his series. That's exactly how you want your prospects to feel.

In a direct sales process, you can use video to establish rapport a little differently. We've got a whole blog post about all the ways to add video in your sales process to close more deals, but for the remainder of this post we'll be focusing on the types of videos that work best to build rapport.

When you're making these videos, you should follow much of the same advice listed in the section above. Just remember, being genuine and helpful matters much more than production quality. As long as your lighting and audio are good, don't be afraid to use your smartphone and a simple editing app to get started.

At the bottom of that post about adding video to your sales process, we go into more detail about how to create and share these videos. We've also got a great list of affordable video equipment if you're looking to level-up your video quality a bit.

Now onto the videos that will help you create stronger relationships with your prospects!

Adding a link to a video in your email signature that introduces yourself is a great way to add more context to you emails. This helps your prospects get a feel for your personality and causes them to think of you as a fellow human rather than an annoying salesperson.

If you hear about a trend or learn something new that you think your prospect would be interested in, shoot a quick video to tell them about it and send it over. This will show your prospects that you're thinking about them and it will demonstrate that you care about helping them, not just about making a sale.

After meeting with someone or having a call with them, consider replacing your email follow-up with a quick video to stand out from the crowd and create a stronger connection.

Building rapport with sales prospects is all about establishing a trusting relationship, but that's not an easy feat. It gets even more difficult when you're unable to meet with those prospects in person. But video gives you the next best thing.

By getting your company's leadership on camera in an authentic way, you can begin to establish your organization as one that's trustworthy, helpful, and authentic. Then, if you get the opportunity to communicate with prospects in a one-on-one sales conversation, you can use video as a salesperson to create an even more personal relationship.

Have you used video to strengthen your relationships with sales prospects? If so, tell us how in the comments below! We may even use your experience in a future update to the article.